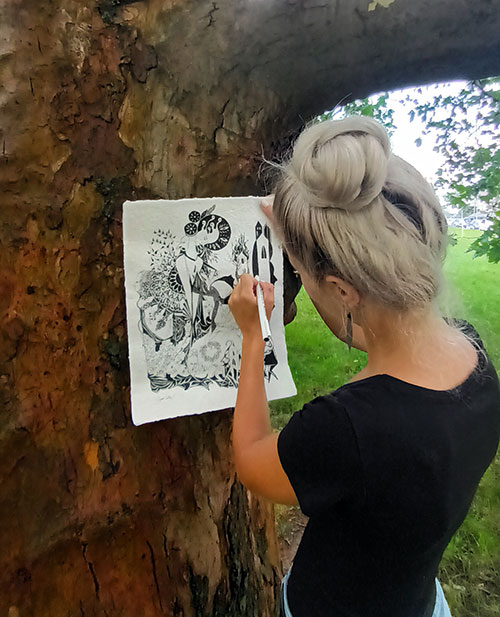 1. Who are you and what do you do?
I´m an author whose works are based on the tradition of graphic art. The main aspect is the combination of black and white, which then creates surreal world inspired by folk culture, allegory and a symbolic concept of reality. Satire and cynical irony also often appear. Images can also be perceived as slightly decadent or macabrous.

The Queen and her Illuminate

2. Why art?
Over time, art has evolved from a purely decorative matter into a philosophical system responsive to the world and the place of human in this world. Art uses available mechanisms to transform reality into a system of abstract symbols and breaks the boundaries of standard perception. And that is very interesting.

3. What is your earliest memory of wanting to be an artist?
That’s hard to answer. Creative activity has always been a way of creating imaginary worlds, hidden behind the curtain of the human subconscious. Very important are associations resulting from this subconscious. Rather than the will to be creative, there were natural tendencies.

4. What are your favorite subject(s) and media(s)?
I use mostly a black graphic pen and a handmade paper, which gives the final version an interesting structure. Maybe I am going to experiment with other material in the future.

5. How do you work and approach your subject?
It is usually a simple formula → will → action → result. However, very often there is a situation where the original idea disappears and the result gets a completely different meaning and appearance. The whole process is thus partially automatic, mechanical and generally laborious, focusing on details that gradually increase and appear on the basis of incoming associations.

6. What are your favorite art work(s), artist(s)?
I admire the works of art of the past, when it had a purely decorative, mystical and representative character. But I´m much closer to the avant-garde movement, when the conventional conception began to recede. I like conceptual tendencies, experiments and the underground is very close to me, it is not focused on earnings, but on learning about art itself in its original forms.

7. What are the best responses you have had to your work?
The best response for me is the viewer’s reaction itself. It doesn’t matter if the reaction is positive or negative. The search for new meanings and associations is essential. Art is thus an experiment and the viewer becomes a researcher who tries to reveal the hidden aspects of this experiment.

8. What do you like about your work?
I like the combination of spontaneity and strategy, discovering new ways of representation and gradually achieving the result.

9. What advice would you give to other artists?
I don’t feel competent to give someone advice, I learn everything myself and I always discover something new. Creation itself is an individual process and often demanding work. As with everything, these are the priorities and the choice of why we actually do that activity, what we expect from it and what are the goals that should result.

10. Where do you see yourself in 5-10 years?
I don’t really plan that far, so it would be just speculation. Life is too changeable and unpredictable. That’s why I’ll keep the answer to myself 🙂

Tereza Tulková is an artist whose works are based on imaginations expressed in black and white tones. Her drawings are influenced by the language of symbols, allegorical alchemy, folk culture and the subjective perception of reality hidden in the human subconscious. Every mythical, surrealistic and allegorical being lives as an individual part of visual poetry, every black and white line symbolizes human destiny, when one is like a pilgrim looking for a way out of his own confusion.

The author is based on the current Czech underground and collaborates with independent art groups and magazines. As part of Czech-Japanese cooperation, her works have been exhibited, for example, at the Tokyo Metropolitan Theater, the Tokyo National Arts Center, and the Polish Embassy of the Japanese Ministry of Culture in Warsaw. She holds the Japanese Honorary Certificate in Art. She currently lives and works in Brno.